Come to the Heroes of Earth Book Party!

Host: Martin Berman-Gorvine, tel. 703-477-1824
When: Saturday, May 24 at 11:00 AM (during Balticon)
Where: Hunt Valley Inn, Parlor 1026, 245 Shawan Rd Cockeysville, MD 21031
When Neil Armstrong became the first man to set foot on the moon on July 20, 1969, he didn't expect to be greeted by seven-armed starfish from the planet Gliese 581d, much less to be offered a lift home by these imperialistic, monarchical, technologically superior "echinodermoids" from another star system. Explore with me the "alternate history" that would have resulted from these aliens' love of stability in government, leading to a present-day America that still has a president whose name rhymes with “Blixen.” Discover what it's like to be strip searched before you can enter middle school, how terrorists think, who launched the asteroid that killed that dinosaurs, and how echinodermoids eat matzah ball soup (messily). Fall in love with Gloria, the key character of Heroes of Earth and my previous novel, Save the Dragons, who is sometimes a redhaired lady, sometimes an orange tabby cat, and always the proprietor of a magic bookstore that offers entry to this and many other parallel worlds. And get a sneak preview of the many other projects percolating in the overactive imagination of Martin Berman-Gorvine.
***Heroes of Earth is due out from Wildside Press later this year.*** 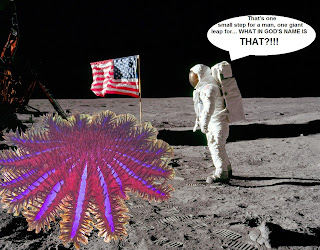 Posted by Martin Berman-Gorvine at 8:33 AM No comments: