The concept of time travel has long since burst through the walls of the science fiction genre ghetto and gone mainstream, in everything from popular novels and movies to network TV shows. It's so familiar, in fact, that we're apt to forget how bizarre and illogical an idea it is, which is one of many reasons why Martina Fetzer's Time Binge (Brooks & Smith Book 1: 99 cents ebook, $12.99 paperback) is such a refreshing comic treat.

Zany energy pulses through this tale, told in a wry, deadpan tone, of the terrible troubles paranormal detectives Edward Smith and Arturo Brooks encounter when their employer, a secretive agency that calls itself "the Reticent," sends them to investigate the reported invention of a time machine in Staten Island. Smith and Brooks are fully drawn characters with massive personal flaws, which fuel the tragicomic plot along with their love for each other, and the setting of present-day New York City and its outer boroughs is vividly depicted. Other characters and supposed glimpses of the historical past and the far future are not as successfully fleshed out, although Patience Cloyce, a time-traveling Puritan from the height of the witch craze in Salem, Massachusetts, does show promise. Our present day's corporate drone world, electronic gadget obsession, and navel-gazing hipsters are the main, deserving targets of the book's sharp satire. Highly recommended. 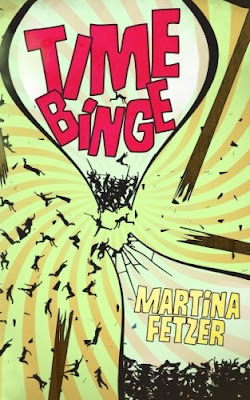 This review is cross-posted on Amazon and Goodreads.

Four-and-a-half Phoboses (out of five).

Posted by Martin Berman-Gorvine at 8:21 AM No comments: