Post-High School Reality Quest is a coming-of-age story that takes place among the geek-video gamer set in suburban Maryland circa 2010. The conceit is that it is written in the form of a 1980's era "text adventure," a dialogue between a sarcastic narrator and the main character, Elizabeth-alias-Buffy, or more likely a dialogue between different aspects of her own personality. (Non-gamers, like me, should look past the occasionally off putting jargon.) We are given to understand in flash-forwards that the heroine has suffered a nervous breakdown and is now a psychiatric inpatient reliving the disastrous events of her high school graduation and freshman year in college.
There are many flashes of wit in this story, but what comes through is an overwhelming sadness. You can't help feeling sorry for the characters, who despite being academically gifted can only express themselves in an emotional pidgin shaped entirely by video games, TV shows, Internet memes, and other trashy pop-cultural influences. Their capacity for friendship, let alone love, has been pixilated. The text-adventure conceit is a telling one because in such games the player can only enter pidgin commands, e.g. "out" for "go outside." Buffy keeps making "choices" that supposedly get her killed, only to be "resurrected" at a point a few minutes earlier, with the game proceeding relentlessly onward while her life just gets worse and worse. The choices she makes are no choices; her free will is a bad joke that is lost on her. You might think there would be a limit on the pathos such an emotionally stunted character could inspire, but not in author Meg Eden's hands. This is art, friends. 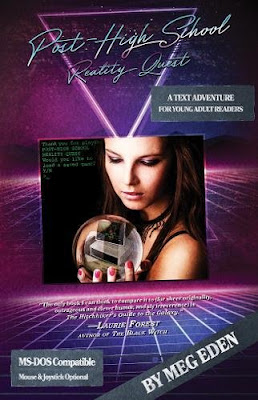 Posted by Martin Berman-Gorvine at 6:54 AM No comments: