Kosher, Then and Now

I compared a menu from "Mr. Broadway Kosher" that I picked up yesterday in midtown Manhattan to one from the defunct Phil Gluckstern's kosher restaurant, where my parents had their first date in April 1963 and my mother saved the menu. It was also in midtown Manhattan.This doesn't really give the full picture--Mr. Broadway Kosher has a rather more extensive menu than Gluckstern's, where I have a feeling that if you asked for sushi in 1963 they would have said, "Susie don't work here Sundays."
A bowl of chicken soup with matzah balls cost 60 cents at Gluckstern's 51 years ago, and $6.50 at Mr. Broadway Kosher yesterday--an increase of nearly 11 times over. Roast Vermont Turkey cost $3.80 at Gluckstein's back then, $23.00 at Mr. Broadway Kosher now, roughly a sixfold increase. The general Consumer Price Index has increased by a factor of 7.8 times, so these price rises are more or less in line.
An additional interesting note for cognoscenti is that Gluckstern's menu had typewritten notes, "The Management requests that you refrain from smoking on the Sabath" (sic) and that broiled meats would not be served on Friday afternoon after sundown. These concessions to the Jewish Sabbath would not be accepted by the Kosher Police as of 2014--the certifying authorities would not allow any kosher restaurant to remain open at all on the Sabbath. O tempora, o mores! 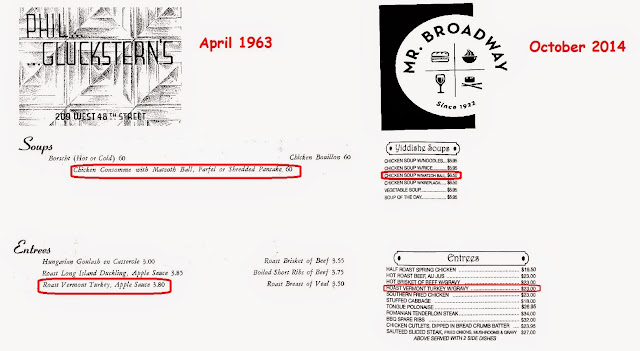 Posted by Martin Berman-Gorvine at 9:16 AM No comments:

"The only people who don't have problems are dead people," my mother is fond of saying, but boy, have I got a ghost for you who's dying (har) to take issue with that. Her name is Rose Marshall and she's the protagonist of Seanan McGuire's Sparrow Hill Road. She was killed in a car crash on her way to her high school prom back in 1952, a crash that was deliberately caused by a sorta-undead Bad Guy name of Bobby Cross. As a ghost "hitcher" ever since then, she's been on a mission to save drivers she can sense are about to die in wrecks or, failing that, save their souls from being taken by Bobby Cross. Are their paths going to cross (har) again? What do you think?
Ms. McGuire has postulated an afterlife of baroque complexity, full of beings like "routewitches" and haunted highways who populate a thousand levels of "twilight" and "midnight" underlying the "daylight" America, and brother, every ghost of them has a story to tell and a passel of problems that don't amount to a hill of beans in this crazy afterworld.
The underlying plot is sound, the fantasy setting is intriguing, and the atmosphere is sufficiently eerie--reminiscent of one of Neil Gaiman's better books, like a cross between Neverwhere and American Gods. On the down side is Rose's habit of sounding disconcertingly like a twenty-first century American teenager. I grant you that she's been keeping up with the times in her unchanging Sweet Sixteen form, but still, a girl who died in 1952 ought not to express her displeasure with her circumstances by saying that they "suck," nor should she have the habit of dropping such irritating present-dayisms as "I'm good" for "No thanks" and "Oh wait, I just did" to express sarcasm. And is it really necessary for Bobby Cross to intone, "This isn't over" after his first encounter with Rose? A better editor would have spared us these minor literary sins.
Still, I give the novel two-and-a-half Phoboses out of three. More, please, Ms. McGuire.
This review is cross-posted on Amazon.com.

Posted by Martin Berman-Gorvine at 7:26 PM No comments: