WARNING: CONTAINS SPOILERS. "There are two kinds of people in the world," runs the old joke, "those who divide people into two kinds, and those who don't." For Robert Sawyer, in his 2016 science fiction novel Quantum Night, the human race, like Caesar's Gaul, may be divided into three parts: "P-zeds," David Chalmers's philosopher's zombies, who are thoughtless drones who go through life without sentient awareness and comprise four billion of the world's seven billion people; two billion psychopaths; and one billion folks with both consciousness and conscience.
Sawyer calls himself an optimist and this is an optimistic novel because a technological solution having to do with quantum mechanics is proposed for the world's Psychopath Problem. The book is also a page-turning thriller that I finished in two days, its hero a utilitarian philosopher at the University of Manitoba named James Marchuk who discovers that as a college student nineteen years ago, he committed terrible acts as a result of brain damage from an unethical experiment conducted by a man he admired, a psychology professor named Menno Warkentin, who in a heavy-handed bit of symbolism is both religious and blind. As Marchuk explores his past and reconnects with forgotten old flame Kayla Huron, who just happens to be a cutting-edge quantum physicist, the world hurtles toward catastrophe under the leadership of psychopaths, and it is up to these oddball academics to save it.
I highly recommend this novel as the best kind of exciting and thought-provoking science fiction. This is despite serious philosophical differences. I would concede, broadly speaking, to the proposed breakdown of humanity into more than half thoughtless followers, enormous numbers of psychopaths, and smaller numbers of thinking people with consciences. However, I do not agree that these are fixed categories that are as sharply defined as electron valences. People are much more complex than that, though the "pure evil" of psychopaths certainly exists, as does altruistic good. I do not agree with labeling the majority of the human race non-sentient, literally thoughtless. This lets mass man or "the mob" off the hook far too easily. Nor do I concur with the implied mechanistic view of human nature, nor with the possibly tongue-in-cheek universal brainwashing at the climax of the novel. Moreover I hold no brief for the doctrine of utilitarianism, especially the repellent credo of Peter Singer cited here.
Still, it's no secret that our world is in desperate trouble, and getting people thinking about these issues is a public service.
Five "Phoboses" 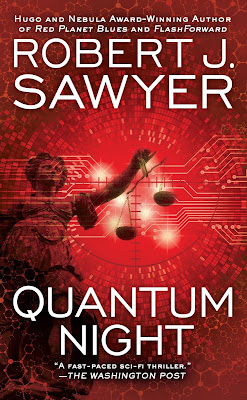 Posted by Martin Berman-Gorvine at 7:11 PM