A Profound Work of Speculative Fiction

Famous Men Who Never Lived is one of the profoundest works of speculative fiction I have ever read. As an author and devoted reader of "parallel world" and "alternate history" fiction, in which we imagine how everything would be different if certain historical events had turned out differently, trust me when I say this is among the best such novels you will ever encounter. It takes the philosophical and humanistic implications of this whole subgenre of speculative fiction to places it has never been before.
The best fiction is at once of its moment and timeless. Chess conjures a stream of refugees from a "parallel" America devastated by nuclear war. Coming to our own America, they face both legal and de facto discrimination, on top of the utter and irreversible loss of everything and everyone they have known. Chess portrays the resulting devastation sensitively, with obvious echoes of the horrible politics of our real-life historical moment.
Yet this is far more than a topical allegory. By labeling the other-world refugees "Universally Displaced Persons," Chess raises the profoundest existential questions. As we age and the people and places we used to know vanish forever, we all become Universally Displaced Persons, trapped in an alien world. And on an even deeper level, aren't we all born into a strange universe we never asked for, one we never quite feel at home in? What can we do, what must we do, in this condition of universal alienation? Chess answers with an inspiring tale of infinite sadness and faith in the redemptive power of art.
Chess's characters are fully realized. Helen "Hel" Nash was a surgeon back home in the world she has lost, but devastated by her permanent separation from her son, who she figures is probably dead in the irradiated America she left, she is adrift until she finds her calling: planning a museum of her home world. But this plan is sidetracked almost immediately when she gives someone she thinks can help her the only copy of a famous work of science fiction from her own timeline, a book with something like the status of 1984 by an author who died as a child in our world. And the book didn't even belong to her--it was the property of her boyfriend Vikram, another Universally Displaced Person who was an academic back home. How will they each cope with this irrecoverable loss?
Do yourself a solid and add Famous Men Who Never Lived to your collection immediately! 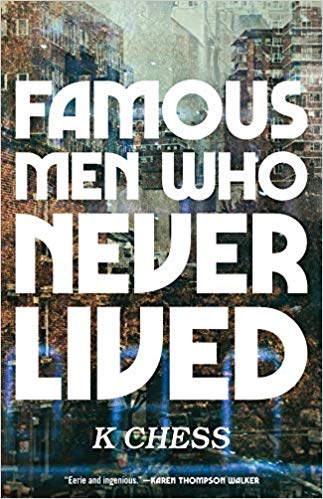 Posted by Martin Berman-Gorvine at 7:19 AM